This author has not yet filled in any details.
So far admin has created 337 blog entries. 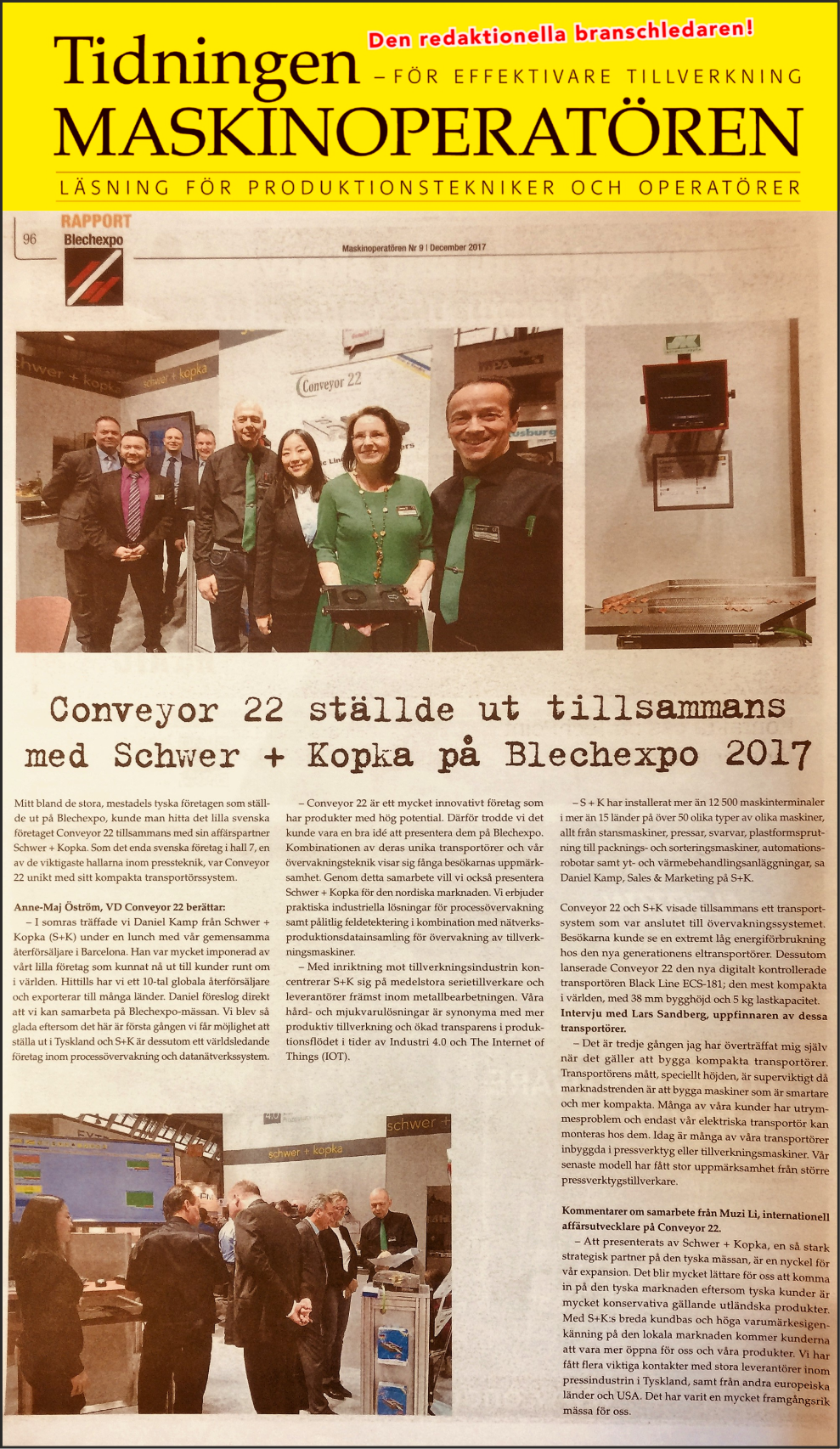 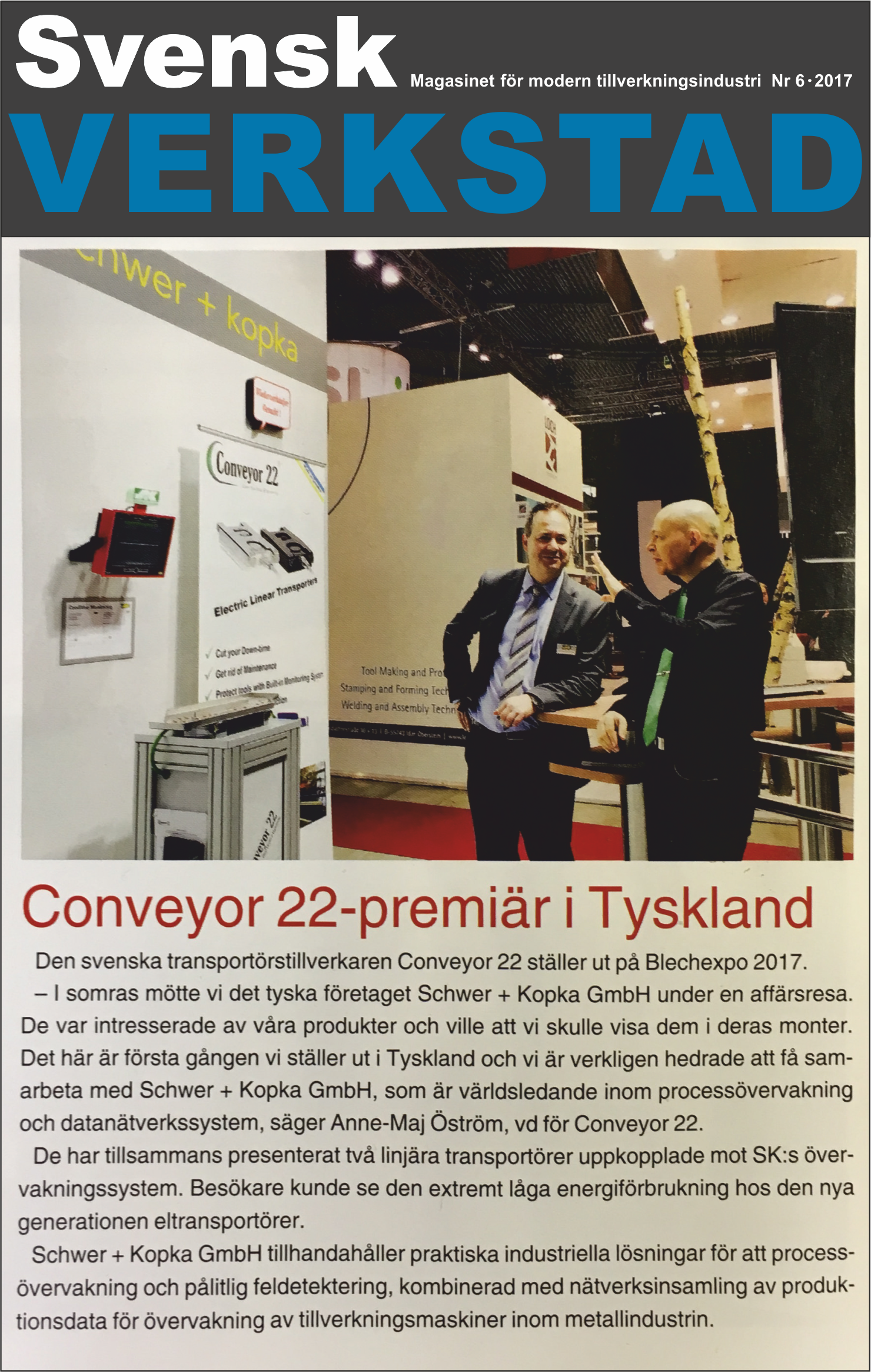 By admin|December 1st, 2017|Media|Comments Off on Tray to Tray delivery
Read More

Conveyor 22 AB among the best growing companies in Olofström

Among 1020 companies in Olofström, Conveyor 22 AB is honoured to be approved as one of the 26 best growing companies 2017. Olofström is the winner of Best Growth community in Blekinge province of Sweden for the third time.

Olofström is famous by its long history of metal processing and as the industrial core of stamping technology in Sweden, where based Volvo and many subcontractors such as Shiloh and EBP i Olofström.

By admin|December 1st, 2017|News|Comments Off on Conveyor 22 AB among the best growing companies in Olofström
Read More

First time exhibiting in Germany, Blechexpo International trade fair for sheet metal working, Conveyor 22 had a fantastic week with our business partner Schwer + Kopka GmbH as well as many visitors.

Thanks to Schwer + Kopka’s invitation and hospitality, we have presented two linear conveyors connected to their monitoring system in the SK stand. Visitors were able to see very low energy consumption on our conveyor. We also showed the new conveyor ECS-181 to the market and received many new international business contacts.

Combining 27 years’ experience and leading market position, Schwer + Kopka GmbH stands for practical industrial solutions for process monitoring and reliable fault detection combined with network production data collection for monitoring the manufacturing machines for metal industry. We are honored to have co-exhibited with SK on Blechexpo fair for the German market.

Turning and sorting of 3 different metal parts at Shiloh

Turning and sorting of 3 different metal parts at Shiloh

By admin|November 1st, 2017|Media|Comments Off on Turning and sorting of 3 different metal parts at Shiloh
Read More

Traditional conveyors are seldom equipped with self-alarm systems, therefore they fail on communicating with the stamping press and preventing damages. Downtime due to malfunctioning of these conveyors can be very costly either in forms of production interruptions or, in worst scenario, tool damage. Piling up scraps caused from output problem risk shocking and breaking stamping tools and damaging press equipment. Even if the production could be hailed promptly, the productivity is adversely effected by time consuming troubleshooting.

– Being deeply aware of such key issue, I integrated a motion sensor into our conveyors which works as a self-monitoring alarm system. In the event of an interference, our conveyor talks with the operating system directly through sending a warning signal. The whole production line becomes halted without external sensors needed. We give maximum security to our customers.

– Conveyor 22’s conveyors make our job easier. In case of interference, we get an alarm from the conveyor and we can see exactly where the problem exists without troubleshooting needed. Now we do not risk getting scraps piled up which could cause tool damage. We are very satisfied with Conveyor 22.

– The electric conveyors are fully integrated into the stamping press tool and controlled by our PLC system. The evacuation duration of these conveyors is programmed from first punching to a few minutes after last punching.

“Sometimes what never happens, is the most important of all”, as Volvo says. The security of conveyors should be one of the most important buying criteria, when take into account the overall costs of stamping tools and press equipment.  Small output devices matter a lot.